Standing in the Lee of the Wheelhouse 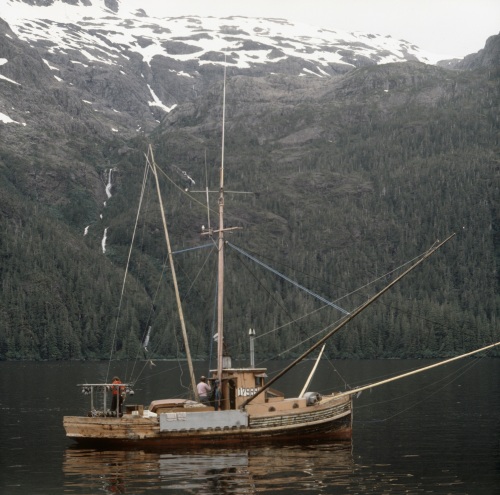 Like people, some of the oldie fishing boats are the best-looking because of that subtle, aged condition called character. In the most ancient oldies, it’s as if all the capability and success and hard times have been reduced down; the residue of experience is carved into weathered lines that impart a humble authority, a grace.

Years ago, my brother Dan Rear had a forty-two-foot horse-shoe-stern fishing boat called The Dixon, built in 1910. She’s sunk now, young hands lost, but at the time I came aboard, trying with impossible optimism to heal from divorce, Dan fished out of Pelican, Alaska, a boardwalk village with a cold storage that bought his fish and half a mile of road that led to the dump where the bears fed.

When you were underway  on The Dixon, if you stood on deck behind the wheelhouse, you caught diesel exhaust and it made you ill. But if you stood on the bow, you saw all the wild beauty of the Inside Passage; you heard the scream of the eagle overhead; you felt the thrum of the old engine and the vibration of the whining winch when fish were on, and these were solid things that felt real.

Dan caught a lot of salmon on that old beauty. Here he is on The Dixon, his first fishing craft, and I can’t tell, and can’t recall, whether he’s checking some busted gear or getting that port beam pole down.

Either way, it takes me back, this photo. It makes me feel the passage of time and how distant is that optimism—and that grace. Maybe I’m just not old enough yet. Or perhaps I’m still standing in the lee of the wheelhouse.

This entry was posted in Uncategorized. Bookmark the permalink.

3 responses to “Standing in the Lee of the Wheelhouse”